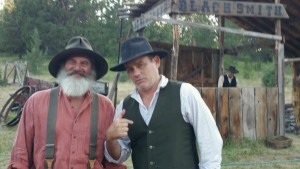 Our second guest today is Actor and PA Mike Gibson , Mike is on the left and Richard Tyson is on the Right of the Picture this from the Movie Niemand.

Mike Gibson is a Character Actor with Luck Films and K7 T Productions he also is a Production Assistant with the Production Company and hasco-starred in the following  feature films: Turn in the Sun, he portrayed the character of the Gas station attendant,  In the upcoming  film Niemand,  Mike played the part of  the Village Idiot, and in the film Playing with Dolls 2 Mike played a Commando .  He will discuss his roles in the films and what it is like working with  Kerry  on a Production Team.

Kerry Wallum Producer and and his partner  David Von Roehm Director of  Luck Films were so glad they found such a natural Character actor in Mike Gibson. They are mentoring him to do more films in the future.  www.luckfilms.com